In early 2008, I started working with long exposure photography and light machines that I designed and built. These works from 2008-9 are also the first of mine where an element of performance is involved. The selection below charts my movement towards and then away from using the machines to reproduce figural images, often inserting images of myself into a space to explore issues of absence, subjectivity and representation.

By mid-2009 I had mostly abandoned using the machines to reproduce images in favor of exploring space and duration. I had realized immediately that I was more interested in the breakdown or distortion of the image than the image itself. This led me to pursue distortions spatially (and sometimes via intentional/unintentional machine failure) and I began to use the machines to do simpler and simpler things, preferring to allow the complex images to emerge as a result of the way these simple algorithms mapped onto and were distorted by the space of the "performance" and often my own body. However, I have occasionally returned to printing images with this spatial focus in mind, for example in the "good heavens bad heavens" instant photographs of 2011 and the 22" x 22" medium format piece of the same title for the Essl Museum in Vienna (Nov. 2011 - Apr. 2012).

Also, I feel a note on digital vs. analogue photography is important here as these years marked a turning point for me in the documentation of my machine work. Early in 2008, I was still using digital photographs to capture my work but by the middle of that year I had abandoned it for two reasons. First, I was interested in challenging the assumption of photography as fundamentally "reproducible" as well as inverting the relationship between performance and documentation. In these works, something emerges in the long exposure documentation of the performance that was not present to the observers of the performance in real time. The documentation brings something new to the work rather than being an archive which seems lacking with respect to the original event of performance, a direct challenge to Roland Barthes' assertion that "In the photograph, the event is never transcended for the sake of something else...." (see "self-portrait with Gertrude and Alice and Roland" below). The photographic object helps to bring these issues to the front in ways digital photography didn't for me. After one performance, when people were gathering around the instant photograph I had placed on the stage, I overheard someone taking a dozen shots of it with his digital camera say, "How sad! After all that it's just an object that can't be shared??" It seemed fitting that this photographic object that exceeds the event itself can only be viewed one at a time. Held in your hands it becomes more rare and private than the performance in which something was missing. A digital photograph never takes on the character of a gift.

Occasionally my work with instant photography or film is read superficially as a nostalgic turn or a form of ludditism, but the second (although, I suppose probably the foremost) reason I moved away from digital photography was simply practical: my performances lasted sometimes over an hour and long exposure digital photographs were producing far too much digital noise over this duration. The black grounds of the works were speckled with red, green and blue pixels on the image sensor that had misfired due, basically, to digital boredom. The only way to get the pure, inky blacks I wanted was to turn to film. I initially turned to instant film because it was the only way to bring the photograph into the live performances and I stuck with it as a medium for the reasons of singularity and objecthood outlined above. 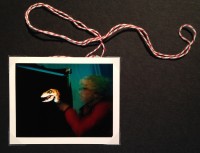